The open hearing for Prayer Book, Liturgy and Music on same-sex blessings was marked by cordiality, care and respect Saturday night at the Downtown Marriott.

More than 400 people showed up for the hearing to discuss both the enabling legislation and the language of A049, Authorize Liturgical Resources for Blessing Same-Gender Relationships. 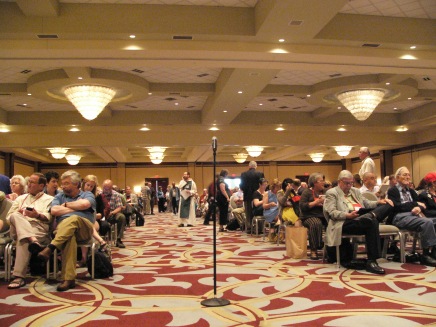 “Mutual respect marked the meeting,” the Rt. Rev. Wayne Smith, Missouri, chair of the Bishops committee, said at the end of the hearing. “All of us are one body and all are a part of life in Christ Jesus.”

“I thought that the evening marked an immense sense of mutual respect and that that in and of itself was a blessing,” said the Rev. Canon Sandye Wilson, Newark, vice chair of the Deputies committee. “When we agree to disagree, and recognize that all of us are created in the image of God, the Holy Spirit was present in this room tonight.”

The Rt. Rev. Shannon S. Johnston, bishop of Virginia, agreed. “I was struck by the sense of care and respect shown on both sides,” he said. “It certainly strikes me that it helped the committee in listening and discernment. The tone of the debate in the Church has come a long way even as people continue to disagree.”

Unlike in years past, when disparaging remarks were common in testimony, witnesses took pains Saturday to be respectful.

The first witness, Jonathon York, a Young Adult Festival participant from North Carolina, started off the testimony. “I am an out and proud young gay man, and I am Christian. This was an impossible concept for many to get their heads around for years, because being gay and Christian was mutually exclusive,” he said. “I want young people to know … they do have a place here in God’s home.”

Several speakers later, testifying against C049, the Rev. Danielle Morris, Central Florida, began her testimony by saying, “To the young man from Duke (referring to York): You are OK. Jesus loves you. And I would be proud to have you in our Church.” But, she said, she opposes the blessings “because of global ramifications,” citing the danger to Christians in predominantly Muslim countries. “We will have blood on our hands” if we do this, she said. “Vote ‘No’ so that others will live.”

Because of the way in which the committee structured the hearing, the first hour of testimony was divided evenly between those who supported the resolution and those who opposed it.

The Rev. Mote Paulo Magomba, a visitor from Tanzania, spoke in favor of the resolution “because I understand our context is different. In your context and culture, the full inclusion of LBGT people will help to speed up the mission of the Episcopal Church.” Cautioning that he was not speaking on behalf of the Anglican Church of Tanzania, he said he had met many LBGT Christians in the United States, “and their work is awesome. … Everywhere in the world, each church should be able to do what is appropriate and fitting.”

April Richey, deputy, Utah, said she supported the blessings. “It begins the process of recognizing that all people are equal in the eyes of God regardless of who they love. Our Church allows partnered gays and lesbians to be bishops, but has no authorized liturgies to recognize or bless relationships. This resolution changes that,” she said, “and sends the message that persons currently or potentially in non-heterosexual relationships are accepted and not merely tolerated for the gifts they bring to the Church.”

Marie Alford-Harkey, deputy, Connecticut, favored the resolution as well. “I work in an ecumenical context,” she said. “I can tell you that we need to witness to inclusion in this Church. It is, quite frankly, an embarrassment spending 37 years” talking about this. “If we want to grow, we need to make this so,” she said. “What is true about the Episcopal Church is that we love each other. … It is time for the Episcopal Church to demonstrate healing and love to the LBGT community.” She added: “Why authorize rites? They are the heart of our Anglican identity. We believe praying shapes believing. We need to witness radically to the inclusive love of Jesus Christ and this Church.”

Many of those opposed to the blessings went to great lengths to stress that they felt no animus toward LBGT persons, even as they cited scriptural and theological concerns.

The Rev. Sharon Lewis of Southwest Florida said the blessings were “more than a pastoral provision. They are really representing a different definition of marriage.” She said that, when she read the proposed blessings, “I realized that I was being walked through the marriage rite as it is laid out in the BCP. It was not what I was quite expecting, and brings a different definition that we have not even had the opportunity to sit down and discuss and do the hard work. … I think we’re moving too quickly.” 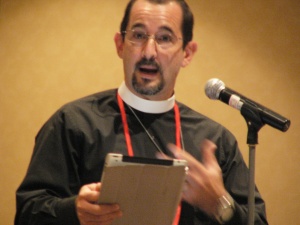 The Rev. James Servillo, Central Florida, said that the “actions, the decisions made right here right now, today, may tell another tale.” Ecumenical partners, he said, “discern the actions of the Episcopal Church moving forward … as a sign of our arrogance … and imperial mentality.”

The Rev. Michael Michie, Dallas, addressed those in the LBGT community by saying that his presence “at this microphone and my opposition is not a barrier to our friendship. I prayerfully call us to a higher level of community … without the use of shame and guilt toward one another. If you are an LGBT person in this room and you have suffered, I am sorry for that.” But, he said, he objected to C049 on theological and biblical grounds. “Is this sacramental? If it is not sacramental, and if we’re heading toward extending to these people in the Church the sacramental blessing of marriage, I would ask you to go ahead and get on with it. Do it.” Otherwise, he said, do not pass the legislation.

But the Rev. Tom Jackson, president of Oasis California, was just as adamant. “We are not willing to be sacrificed again in the name of Anglican unity or future unity with the pope,” he said. If the resolution is passed, “we will be able to offer all of the Church’s sacraments to all of the baptized.”

In discussing the actual language of the proposed liturgy, few witnesses stepped forward; the testimony, scheduled for an hour, ended in 12 minutes. Some had problems with the term “same-gender” as opposed to “same-sex”; others thought the language was too close the marriage rite in the BCP.

Deputy Diana Moreland, Arizona, summed up the feelings of many at the hearing by describing a friend of hers. “We went to the same college but we differ on everything. And yet when we were talking about the question of marriage and equality among our LGBT friends, she said to me, ‘I don’t understand why this is an issue. It should just be.’ … This should be a non-issue.”

Prayer Book, Liturgy and Music took up the resolution again at 7:30 Sunday morning.