8 Things to Know as You Prepare to Land in the Land of Zion, Salt Lake City

By Jeffrey Stevenson, staff writer, postulant in the Diocese of Virginia, native Utahan and former Mormon.

#8. Navigating Salt Lake City is easy: You always know where you are in relation to the Temple.

Starting at the Salt Lake Temple, the streets increase at each block by a factor of 100. This means, if you are on the corner or 400 E and 300 S (locals would say 4th East & 3rd South), you are four blocks east and three blocks south of the Temple. This even holds true in the suburbs. If you are at 90000 S 200 E, you are 90 blocks south and two blocks east of the Temple. So, if you know where you need to go in relation to the Temple, it’s easy. If you don’t, see #1.

#7. No one talks about the city’s namesake.

“Lake, what lake?” The Great Salt Lake might as well be a void in space; most Utahans have nothing to do with it. It’s also 75 miles long and about 35 miles wide, making it bigger than the state of Delaware. And, like the name suggests, it’s salty. This means floating in the Great Salt Lake is effortless but smelly. If you ask a local about a tour to the Salt Lake, they are going to give you a funny look and tell you to go to Park City. If you want to experience the lake, its Wikipedia page is a great place to start.

Everyone thinks that his or her state has the worst drivers. But coming from Washington, D.C., I feel as though I can say with some confidence that Utah drivers do not like to follow the rules. If you are waiting on a red light, do not hit the gas when it turns green—look both ways before you pull out. Yellow lights seem to be treated as an indicator to speed up to “catch the light.”

#5. The busiest international terminal around – well, for its size.

SLC isn’t actually the smallest international airport, but it kind of feels like it, in a good way. Don’t be surprised if you get off the plane and there are thousands of people waiting. The day I flew in was a day when many of the Mormon missionaries were coming home from their missions. There were 20 young men coming home from abroad, all in dark pants, white shirts and nametags that said, “Elder ______”. When I came down to baggage claim, there were hordes of people with signs welcoming home their sons with big, proud smiles on their faces.

Don’t worry if the hordes are there when you arrive. The airport is extremely well run and has a simple layout. There is one set of check-in in counters and they are right next to the three baggage claim belts, so everyone ends up in the same spot. With so few baggage claim spots, it is usually quick and easy to get your bag.

If you have not spent any time in a desert there are some things you should think about:

#3. Coffee flows freely in the city by the Great Lake (except on Sunday). 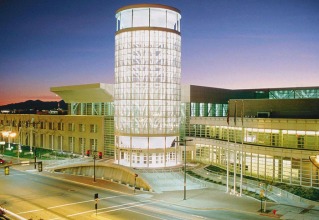 This city takes its coffee very seriously! When you search for “coffee shop” on Google maps near the Salt Palace Convention Center, you will see you have a host of choices. If, however, you are looking for a cup of coffee on Sunday morning before the 8 a.m. Eucharist, you might have to default to Starbucks. For the rest of the week, if you are a coffee lover like me, there are a couple of coffee shops that you cannot pass up:

#2. If you’re a foodie, you won’t be disappointed with Salt Lake.

There are a host of high-end restaurants with plenty of stars. However, if you are feeling adventurous with a taste for straddling-the-border cuisine, you can’t throw a stone without hitting a great Tex-Mex restaurant. Most of the great places are not fancy. In fact, I would be wary of the “fancy” Tex-Mex restaurants. But if you explore the hole-in-the-wall Tex-Mex food joints in town, you will not be disappointed.

For those of you visiting the city for the first time, you might be surprised by the craft beer culture that has been booming since the mid-80s. In the city, there are an unusually high number of craft breweries for a city the size of SLC. In the state that consumes the least beer of any, that’s saying a lot. Within a few blocks of the Salt Palace are a couple of craft breweries worth checking out: Red Rock Brewing Co. is at 254 S. 200 W. Squatters is at 147 Broadway. Both have great American fare and an impressive selection of beer.

Little known fast-food fact: Salt Lake, not Kentucky, is where KFC got its start. Though I have yet to find this location, I hear that SLC is the only place you can chow down on a KFC chicken buffet while sitting next to one of the colonel’s original white suits. Let the sartorial scavenger hunt begin, General Convention.

#1. Most people in Utah are ridiculously friendly and hospitable.

I know this is going to sound biased, and I hear that the Hoosiers set a high bar in 2012, but people in Utah are just friendlier than anywhere I have ever been. Every time I come home for a visit, I’m reminded how upbeat, friendly, helpful and hospitable Utahans are. Don’t be surprised if a perfect stranger strikes up a conversation in the Starbucks’ line, or stops to ask if you need help because you’re looking at a map, or if you have three people pull over to help you with a flat tire.

Utahans put a lot of stock in being a good neighbor, and it shows.  May we all extend to them and each other the same kindness on our journey to and time in Zion.