A Letter from Bishop Johnston, Four of Center Aisle’s Priorities

The following letter from Bishop Johnston and article from Center Aisle originally appeared in our first print issue of the 2015 convention.

The Power of the Center: A Letter from Bishop Shannon Johnston 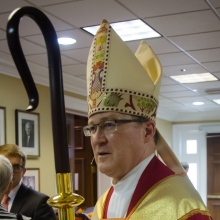 Blessings to you from the Diocese of Virginia, as Center Aisle begins daily coverage of our sixth successive General Convention. We like to consider this opinion journal to be a gift to the General Church, and we have been gratified by the positive response you have given us over the past 15 years.

Undoubtedly passions and rhetoric will flare over the next 10 days. They already have in connection with the Task Force on Marriage’s proposal to take a canonical route to marriage equality, rather than the constitutional route we favor. There will be room in our daily print publication and on our website for a wide array of views on these and other important issues.

But as General Convention officially begins its deliberations, I’d like to write about the important role we continue to see for Center Aisle, as well as some changes you will note from our approach in the past.

For starters, our print edition is slimmer than before, befitting our “green” convention. You’ll also discover that our digital presence at http://www.centeraisle.blog is more robust than ever, with commentary and essays from all over the Episcopal Church and the Anglican Communion. As I mentioned, there is also room for you to participate in the ongoing discussions, through our digital forums.

None of these changes impacts our core role. Though the Episcopal Church of 2015 is not the same as the Episcopal Church of 2000, I believe the need for a voice from the “center” is as important as ever – perhaps more important. I began reading Center Aisle before I came to the Diocese of Virginia, when I served as a deputy from the Diocese of Mississippi. What impressed me then, and continues to impress me now, is the vital need for a voice that recognizes how much stronger the ties are that bind us than are the disagreements that divide us.

The “center” in Center Aisle is not the midpoint of a line between the left and the right. It’s not a place for mushy moderation or pa-pered-over agreements. The “center” is the core of a circle – the foundational core that unites us at the foot of the cross. That’s the core that’s more fundamental than any resolution or amendment. The powerful traditions of Anglicanism don’t call on us to foster artificial agreements across the board. Indeed, agreement is overrated! They call on us to live into our disagreements, while continuing to join one another at the communion rail to disagree better.

We will use the Center Aisle lens to focus on many of the issues at this convention that call on us to remember the fundamentals that unite us. Among those topics will be several that have to do with how we, as a unique community of faith, go about making decisions in ways that honor our disagreements and that celebrate the ties that bind us.

They will include the election of a new presiding bishop; the question of how the sacred union of marriage should be defined in the 21st century; the significant calls for reform and innovation from the Task Force for Re-Imagining the Episcopal Church; and the impact of our decisions on our fellow provinces in the Anglican Communion. You’ll find out more about those issues in an accompanying editorial that is part of this edition.

It is a full plate, and much is riding on not only what we decide during these 10 days in Salt Lake City, but how we decide it. The staff of Center Aisle looks forward to working, reflecting and praying with you during this important time together. There are so many opportunities and blessings that lie before us.

Center Aisle: Four of the Issues We Care About

Amid the hundreds of resolutions, studies and trial liturgies that will come before the 78th General Convention of the Episcopal Church, four will go a long way toward defining our days together in Salt Lake City. Center Aisle will take a particularly focused look at this short list as the discussions proceed, and will welcome your views as well. They are:

Much time will be devoted to discerning how our Church should define marriage in the 21st century. A key part of that discussion will deal with, not where we should go, but how we should get there.

Center Aisle believes that the strongest witness to marriage equality would come from the constitutional process of changing the Book of Common Prayer. This approach would require approval from two successive General Conventions.

The canonical approach proposed by the Task Force on Marriage would produce a quicker result, since it would involve only one General Convention. But it would leave the new definition of marriage vulnerable to challenges, legal and otherwise. If marriage should indeed be “equal” (as we believe it should), then it should be addressed in the “equal fashion” required of all constitutional changes.

The Task Force on Re-Imagining the Episcopal Church (TREC) has come up with an array of interesting and substantive proposals. The stage is set for a series of important discussions. We support some, though not all, of the task force’s proposals.

For example, the call for a unicameral General Convention leaves us unconvinced. The unique ministry of bishops, as reflected in their ordination vows, is best represented in a collaborative but separate House. There is certainly room for greater efficiencies and more sharing of ideas and perspectives. But a two-House General Convention remains the most accurate reflection of the richly distinctive ministries within the Church.

We are impressed by the field of nominees. Any one of the four bishops would be a strong choice.
The Church needs a leader who will draw from our rich traditions, while helping us to connect with a broader community that is more secular and less attached to organizations than previous generations have been.

We should never fall victim to the misperception that we are making decisions in isolation as a national church. The Episcopal Church is a province of the Anglican Communion, and those treasured ties to provinces all over the world always should be considered in the decisions we make and in the way we go about making those decisions.

That’s our short list. We look forward to offering an array of opinions on those and other issues – in our print product and on our website. Now, on with the discussion!