With Ears to Hear: The Church Responds to #MeToo

Today, the House of Bishops will host a “Liturgy of Listening” in the main worship space of the Austin Convention Center just before the official start of General Convention.

Imagined and planned by the House of Bishop’s Pastoral Response to #MeToo Planning Team, this liturgy seeks to draw participants into a sacred space, where things once hidden or whispered of might be brought into the light and offered to God.

Expecting your typical listening session, I was intrigued by the news of a liturgy. While a great many things drew me to the Episcopal tradition, one of the most moving was its liturgy. My great appreciation for our life of common prayer has become more developed, nuanced, and learned as I’ve progressed from newcomer to seminarian, and yet I am still moved by the same things: its call to unity, reconciliation, and sacramental living (if only for a moment). Taking on the #MeToo task through a purposeful, and hopefully well-moderated, listening session felt like a win. Engaging with #MeToo and its implications liturgically felt somewhat provocative, like the promise of something wild and Holy.

If the power of liturgy in part comes from the dissonance between what we do in liturgy – and what we know to be true in the doing of it – and the world outside of the liturgy, well, I can’t think of a better medium in which to engage with #MeToo.

#MeToo, a movement started by social activist Tarana Burke more than 10 years ago and recently revived in Hollywood, has torn across social media and other platforms exposing acts of sexual harassment and abuse of women in seemingly every domain. Our beloved Church is no exception. The Rev. Gay Clark Jennings, president of the House of Deputies, acknowledged this truth in noting that “those problems have been endemic in our culture in the Church for far longer than Hollywood, or tech culture, or corporate journalism have existed.”

Bishop DeDe Duncan-Probe, chair of the planning team, spoke with me about the upcoming event. She reflects that, growing up in the Church, a culture of sexual harassment and abuse of women has been “as much a part of [her] experience as prayer, communion and worship.” She doesn’t want that to continue. 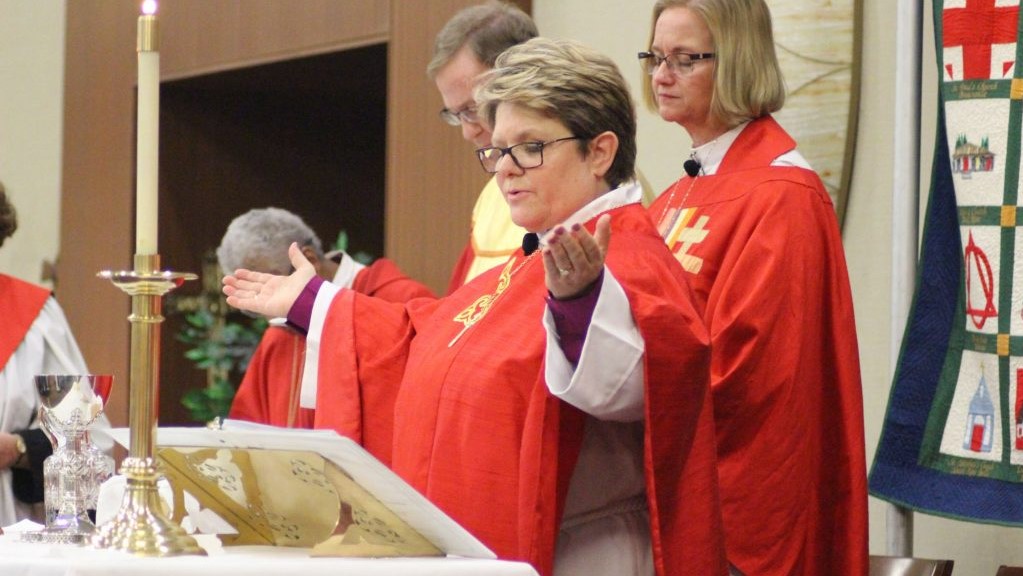 Bishop DeDe Duncan-Probe celebrating Eucharist at her consecration as bishop of the Diocese of Central New York. Photo credit: cnyepiscopal.org

Where do we go as a Church to acknowledge and begin to heal? Duncan-Probe answers, “to liturgy.” She notes that while we’ve done many things very faithfully to both correct course and to acknowledge and repent for sins of the past, we’ve never as a Church done this: come together to seek God’s healing by placing our sin in the light through the transformational power of liturgy.

The planning team has reimagined the way in which we share of ourselves during worship. Rather than a place of hidden truths, Duncan-Probe hopes that this will be an open space.

She notes that the liturgy will begin with repentance, led by the House of Bishops, so that those gathered “can have ears to hear” the witness of those whose stories have largely been known to them alone. Indeed, a posture of repentance feels necessary to the gravity of #MeToo, just as a posture of deep humility feels necessary to receiving the testimonies of the victims. The devastating impact of the systemic issue of sexual harassment, abuse and exploitation within our Church cannot be understated. And, the pervasiveness of this culture in society at large must be acknowledged. On any given Sunday, a third or more women who come together to worship have been sexually assaulted, and far more have been sexually harassed.

Almost 40 people shared their stories of sexual harassment, abuse and exploitation with the planning team. Ten of those reflections, representing the breadth of all that were submitted, will be read in the first person singular during the liturgy by members of the House of Bishops. Duncan-Probe shares that the courage of the people who submitted reflections is humbling and that “this is a trust that is being held safely and securely.” Great lengths have been taken to ensure that the reflections remain anonymous and are treated with the utmost respect. Duncan-Probe notes that some of those who shared their story said this was the first time they really felt heard within the Church and that the very act of sharing their experience had restorative value in their lives.

Duncan-Probe hopes that this service, which is an entirely new offering, will be used as a model for other systemic issues facing the Church, having life well beyond the premiere event.

I look forward to experiencing this liturgy and feel hopeful that such a profound piece of our Episcopal identity will be used to acknowledge this wound within our polity (and larger society). With close to 30 related resolutions on the docket for Convention, this liturgy seeks to set a necessary tone of repentance and humility before the profound witness of those who have spoken their truth. Duncan-Probe invites all to “come, even those with skepticism, anger or righteous indignation, but come with ears to hear.”

The Liturgy of Listening service will take place on July 4, from 5:15-7 p.m. CST, in the worship space set up in the Austin Convention Center. The service will be live streamed at General Convention’s media hub. A pastoral response team of clinical psychologists, therapists and spiritual directors will be available to those who may need them. For some, this liturgy will be too painful to participate in. Take care of yourselves and each other.

Tagged as: Faith in the Public Square, GC2018, GC79, MeToo, The Episcopal Church