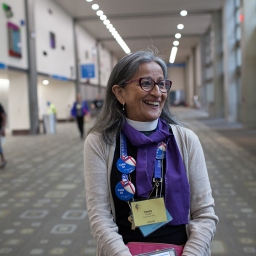 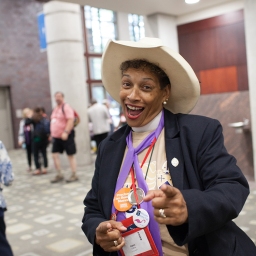 We’re getting to know the thousands of Episcopalians here at GC79, a handful at a time. Here’s Center Aisle’s second installment of our world-famous series (read: Church-famous series), Humans of General Convention!

The Rev. Yamily Bass-Choate
Liaison for Global Mission, the Diocese of New York

“I have been working with the Diocese of Cuba for almost 10 years. My job, and my hope, and my prayer for this General Convention is that we say yes to Cuba, that we open our arms. There is precedent that the canons have been extended before and this is an opportunity. Poor people cannot wait three years until the next General Convention. We need to do something about it this year.”

“I’m a delegate and running for an Episcopal Church Women national board position in multi-media. I think we need to bring ourselves further into the 21st century. We are the Body of Christ. Technology brings us stronger into the Body of Christ if we know how to use it effectively … There’s an incredible amount of potential. As we warm up to technology, it has to be an integration of machine and human. That way it’s effective for us to help communicate the Body of Christ to the blessed community. The technology, I think, can bring us even more present to the world and the Jesus Movement.”

“My favorite thing [about General Convention thus far] was yesterday, going over to the detention center, and seeing the women wave the white towels at the top to let us know that they heard us and were encouraged. That was my favorite thing. 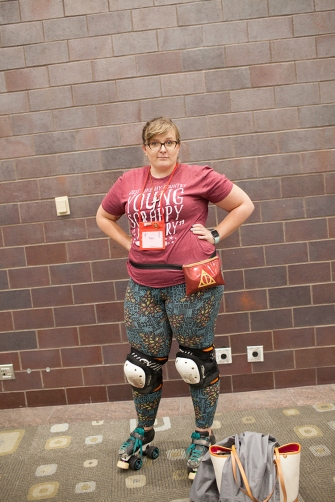 “I hope that all the resolutions bring us together rather than apart, and I think that we’re moving in that direction. The downside is that we’re not actually moving in the direction where the Episcopal Church will be eventually, as quickly as I think might be necessary.”

What do you mean by that?
“I think with B012 [Sacramental Marriage Equality], and making a compromise, rather than  going as far as the committee last triennium recommended, is able to keep us together and united but it’s not moving us where I think we’ll end up. I think that might also isolate some people which is a tricky balance to strike, but I think we’re kind of getting it.”

Any trouble roller skating around General Convention?
“Not so far, but I am inadvertently startling people. Not intentionally. And the truth is I wouldn’t wear them if I thought for one second I was going to hurt somebody or run into somebody. I did take the escalator up to the secretariat which was a very poor choice. So when I was coming back down the escalator, I slipped and fell right on my butt. But bishops around me were really nice about it. Other than that, it’s been pretty seamless!”

Tyler Kerr
Alternate Deputy from the Diocese of Kansas

“The racial justice and racial reconciliation movement [has really moved me]. We heard some amazing testimony this morning from the Archdeacon to the Diocese of Hawaii. He was talking about the injustices for native Hawaiians that haven’t even been mentioned. He was speaking to their experience of having their land taken from them, the reality that prices have sky rocketed, and that in Hawaii the prison population is approximately 61% native Hawaiians. This is a huge issue that has not even been a part of the Episcopal Church’s vision.”